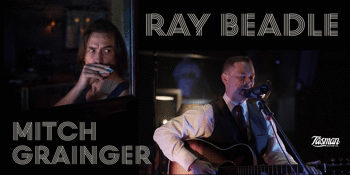 “Mitch Grainger is the real deal when it comes to playing and singing honest straight up Blues. It takes many years and many experiences to reach a place where every note you play and every word you sing has a purpose… it’s called mileage, Mitch Grainger has plenty and I am privileged to reconnect with my friend to share these shows celebrating International Blues Day Weekend!!” – Ray Beadle

RAY BEADLE's guitar and vocal styles evoke numerous blues legends, whilst concocting a breathtaking style all of his own.  It is not by chance that Ray has become a favourite amongst Australian blues and music fans.  An exhilarating guitarist, an enthralling singer-songwriter, and an extremely talented performer, Ray was awarded Best Album, Best Song, and Best Male Artist in the Chain Blues Awards.

Ray Beadle is the genuine article, his music comes deep from the heart and soul, stirring emotions in people with his guitar genius. Ray’s music is rich with a deep history of the Blues; Rich from 20 years of experiences garnered from performing Nationally and Internationally; and rich from a deep understanding of his instrument and how to make it stir something within the listener.  He knows that’s what the Blues is about.  Ray’s life as a musician started when he was just 9, and for the next 20 years, Ray has played with and learnt from the best, including many years spent performing and recording with the Foreday Riders; (commonly referred to as the ‘University of the Blues’).

MITCH GRAINGER is a perfect paradox. A white guy from Australia, that infuses the blues genre’s traditional styling’s with a confidence, and depth of spirit, that has him being compared to the likes of Robert Johnson* by American music critics.

Since stepping into the light with his 2015 breakout solo acoustic release ‘The Blues’, Mitch Grainger and his high-energy stage show have burst onto the blues & roots scene, like a field holler echoing from the deep dark south through a dusty 50’s tube amplifier. He’s packed houses in the US, Australia and Scandinavia, performed at prestigious festivals, such as the American Folk Alliance in Kansas City, and earned standing ovations while opening for Tommy Emmanuel across the North East of the USA.

His sound, built on a talented configuration of vocals, harmonica and guitar, has come of age**. It’s been likened to a fine single malt whiskey by Steve Creedy of the Australian Newspaper, and the comparison is apt, as Mitch Grainger has quietly been maturing as an artist for over 25 years, while performing and recording along side some of Australia and the world’s greatest artists, such as Malcolm Young (AC/DC) and Harry Vanda to name but two.

Now with a growing global fan base that includes over 100,000 subscribers on YouTube, Mitch Grainger is in the studio recording an album with the working title of ‘Plug It In’ that promises to take his raw emotional form of Blues & Roots music up the metaphorical Mississippi river, out of the acoustic domain, and into the voltaic.

*“Grainger plays pure acoustic blues with the heart and soul of Robert Johnson… close your eyes, and you can feel the heat and smell the dust of Mississippi” - Suzanne Cadgène, Elmore Magazine.

**“Have a listen to his music… Mitch has come of age” - Harry Vanda.