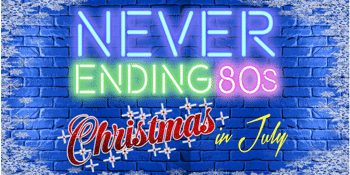 Brass Monkey (Cronulla, NSW)
Friday, 23 July 2021 6:30 pm
71 days away
18 Plus
POP
Rock
Adult
Music
Send this event to
There’s no other decade like the 80’s, and those Christmas morning with the Rainbow Brite, Atari’s and G.I. Joes were the some of the best EVER!

NEVER ENDING 80s CHRISTMAS IN JULY SPECTACULAR will take you back in time with a night packed full of the biggest hits by the biggest artists, the Decade that was the 80s was awesome and with that came with THE MOST EPIC soundtrack.

NEVER ENDING 80s are bringing that soundtrack to the stage in this special show with all the trimmings, as they carve their way through the music of Prince, Madonna, Cyndi Lauper, Roxette, Tina Turner, Pat Benatar, Michael Jackson, Whitney Houston, as well as so many other giants, you’ll be Dancing and singing along to all of your 80s tunes LIKE TOTALLY..!