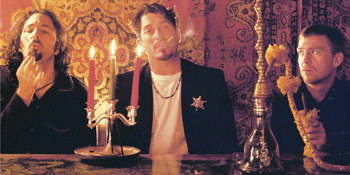 Brass Monkey (Cronulla, NSW)
Sunday, 7 November 2021 6:30 PM
16 days away
18 Plus
Adult
Music
Send this event to
It’s been a while but Karma County head back to the Brass Monkey after a career hiatus for a special matinee show to celebrate the 25th anniversary of the release of their debut album Last Stop Heavenly Heights in 1996.

Arriving on stage in those early days around Sydney with just a snare drum, acoustic guitar and double bass, the band foreshadowed the acoustic roots movement that has become an essential element of contemporary Australian music with songs like the evergreen Postcard. Since those small beginnings they have waltzed their way into the hearts and minds of music fans, and critics, all over the world. They went on to release four more celebrated studio albums and one double album retrospective, including ARIA nominee Olana (1999), and ARIA winner Into The Land of Promise (2000).

They played house concerts, pubs in the bush, the Sydney Opera House, and international festivals like WOMAD Auckland, WOMAD Reading, WOMAD Seattle and more. And occasionally doubled up as the backing band for their late friend and mentor, legendary
singer Jimmy Little, in Australia, Europe and North America.

The three founding members – Brendan Gallagher voc/guitar, Michael Galeazzi bass, & Stuart Eadie drums – head out on the road again to play Last Stop Heavenly Heights in full, and some other much loved songs from their unique songbook.