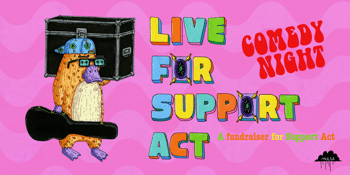 Brass Monkey (Cronulla, NSW)
Thursday, 18 March 2021 6:30 pm
10 days away
18 Plus
Adult
Comedy
Send this event to
When COVID hit us nearly 500,000 live event workers found themselves suddenly without work.  Support Act – the Heart and Hand of Australian Music - was there with a helping hand offering Crisis Relief grants, helping to cover basic living expenses like medical, rent, groceries and utilities.  They also provided a life line for those whose mental health suffered as a result of these job losses with their Wellbeing Helpline.

With the live events industry still a long way from being back to ‘normal’ Stagekings and the Brass Monkey have joined forces to present 3 nights of amazing entertainment “Live for Support Act” at the iconic Brass Monkey in Cronulla to help take that number to over $100,000 for Support Act!  Featuring some of Australia’s best comedians, musicians and singers, Live for Support Act is going to be 3 nights not to be missed!
Donations are also being taken through our Go Fund Me page at gf.me/u/zj8yv7 and keep an eye on https://liveforsupportact.com.au for the most amazing ‘Mulga the Artist’ Live for Support Act merch, and our upcoming auction of experiences and exclusive items you won’t find anywhere else!

Peter Berner
Peter started his career as a stand-up comedian in 1988 and has performed at various prestigious festivals, including the Melbourne International Comedy Festival, the Sydney Comedy Festival, the Adelaide Comedy Festival and Just For Laughs - just to name a few. His intelligent humour has always set him apart as a performer who can comfortably straddle comedy styles as disparate as satire, observational comedy and reactive comedy with easy.
Peter's major TV hosting roles have been Backberner (1999-2002, ABC TV), The Australian Film Institute Awards (2004), The Einstein Factor (2004-2009, ABC TV), The Loaded Brush (2009, ABC TV), You Have Been Watching (2011, The Comedy Channel) and The B Team with Peter Berner (2016-2017, Sky News Live).
Peter has been the breakfast co-host of Triple M's The Cage (2007), which was networked live each day along the east coast, and has also hosted his own solo radio show, The Peter Berner Experiment (2008-2009), on Triple M. On AM radio he has hosted weekend afternoons on 2UE (2012).
Clip: https://vimeo.com/141631074
Al Del Bene
Los Angeles Comedy Awards Comedian of the Year, Al Del Bene broke into comedy in Boston at the ripe age of 18. Upon moving to New York City he quickly became a staple of the underground comedy scene. After bleeding New York dry of every last joke about how miserable living there made him, Al moved to sunny Los Angeles where he became a regular at the world famous Laugh Factory on Sunset Boulevard.
Al Del Bene has toured extensively with Dane Cook, performing to more than 100 sold-out stadiums and arenas as part of Cook’s tours. Del Bene has also performed at the Sydney Opera House with Bill Burr and supported Jon Lovitz and Tim Allen on countless shows.
Al has travelled to Kuwait and Iraq to perform for the troops and has had TV appearances on Comics Unleashed, Jon Lovitz Presents and NESN Comedy All Stars.
Winner – Comedian of the Year – L.A. Comedy Awards 2012
“Genius of Stand-Up” – The Manly Daily
Clip: https://www.youtube.com/watch?v=d4Pt6j5rIPc
Rebecca De Unamuno
Rebecca De Unamuno is an actor, improviser, stand-up comedian and voice-over artist.
She has appeared on many television shows including Just For Laughs Australia, The Glass House, Big Bite, The Chaser’s War on Everything, Kath & Kim, Comedy Inc - The Late Shift, and Talkin' "Bout Your Generation.
On radio Rebecca has been guest co-host of Triple M Breakfast, Tom and Subby, The Shebang and is a regular guest on Thank God It’s Friday (702 ABC Sydney).
Rebecca has performed comedy and improv for the past 20yrs at various venues and festivals throughout the world including Just For Laughs, Edinburgh Fringe Festival, Adelaide Cabaret Festival, The Sydney Comedy Store, Enmore Theatre, Belvoir St Theatre, Melbourne International Comedy Festival and New Zealand Fringe Festival. Rebecca has also toured nationally three times with Seinfeld’s Jason Alexander.
Rebecca is a two-time Cranston Cup Champion and was a member of the Australian team which won the Improv World Cup at the 2001 Just For Laughs Festival in Montreal. Rebecca was the first woman in the history of the competition to be named Player of the Tournament.
Clip: https://www.youtube.com/watch?v=eexFQ6r3JJA
Luke Heggie
Starting out as RAW Comedy winner and going up from there Luke’s accolades include a two-time ARIA Award nominee for Best Comedy Release, the coveted ‘comic’s choice’ Piece of Wood Award at the 2017 Melbourne International Comedy Festival, the 2015 Sydney Comedy Festival’s Director’s Choice Award, and was nominated for Best Newcomer at the 2012 Melbourne International Comedy Festival.
Luke Heggie’s television appearances include performing live on the prestigious Melbourne International Comedy Festival’s Opening Night Allstars Supershow, Melbourne International Comedy Festival’s Oxfam Gala,  Just for Laugh’s Stand Up Series filmed live at the Sydney Opera House for the Comedy Channel, you would have also seen him on Ten’s The Project, ABC TV’s Comedy Next Gen and Comedy Up Late.
“Genuinely peerless. Have it.” Herald Sun, Melbourne
“Brilliant stuff.” Herald Sun, Melbourne
Clip: https://www.youtube.com/watch?v=KJTHOX54xfk
Host: Andrew Barnett
Andrew Barnett is best known as Barney to the audiences of Fox Sports where is a resident funny man on Sunday Night with Matty Johns and The Back Page. Along with James “The Professor Rochford” he cohosted of The Night Watchmen, The Professor’s Late Hit and Narrow World of Sports. He wrote and performed on The Professor’s Farewell Tour and The Professor’s Second Year Syndrome.
Andrew has been performing as a stand up since 2010 when he was a NSW Finalist in Raw Comedy. Since then he has performed sold out shows at Comedy Clubs and Festivals across Australia and New Zealand. Andrew is a crowd favourite, whose relaxed style belies a razor sharp wit.
“Quick witted, sharp-tongued…” The Daily Telegraph
Winner - ANZ Blue Rooms Comedy Prize 2015
Clip: https://www.youtube.com/watch?v=Ti3oxLyuGDw&feature=youtu.be