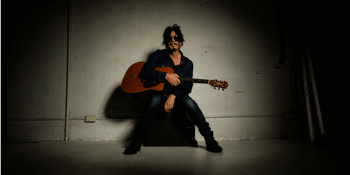 Brass Monkey (Cronulla, NSW)
Sunday, 8 November 2020 12:30 pm
17 days away
18 Plus
Adult
Music
Rock
Send this event to
The past few months for the creative chameleon, Steve Balbi, has been time to peel-back yet another layer of skin to reveal an entirely new pigment – an iridescent sunburst orange in colour, melody and tone. This new fabric of songs, suitably titled I Think I Know For Sure, takes the form of a Limited Edition 12” Vinyl and CD. The record’s second single – ‘My Sunshine’ – is out now.

“’Why don’t people make music like they used to?” This is what I kept hearing,” ponders Balbi, “so I did! It’s my new single and it’s called ‘My Sunshine’. In fact, my new record in its entirety is reminiscent of days gone by. But a warning to all the kids out there: modern pop may implode upon listening, so parental guidance is recommended.”

I Think I Know For Sure was produced by Balbi, who makes every noise on every song, with a little help from Pete Drummond (drums) on ‘Sorry’ and ‘Make It Right’. Featuring seven songs that posit us back to the future, this new fabric of material was woven and written in its entirety by Balbi, at his home studio in Sydney, mixed by Tony Wall at Kiln, and mastered by Paul Gomersall in Byron.

The music of singer, composer, performer and producer Steve Balbi mines a kaleidoscope of life at the margins. Transcending rock and pop while coalescing sentimentality and soul, Balbi bespeaks Bowie and Dylan in melody and verse, exploring the heterogeneity, refinement and dirty rotten groove of Radiohead.