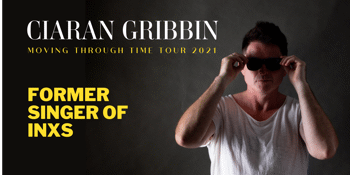 Ciaran Gribbin is a Grammy-nominated songwriter & performer who, in addition to working with world class artists such as Madonna, U2, Paul McCartney, Snow Patrol & Al Pacino, has toured the world as the singer of INXS. Ciaran received his Grammy nomination for co-writing Madonna’s smash hit ‘Celebration’.

Ciaran’s ‘Moving Through Time' tour, features songs and stories from his latest EP release of the same name. He’ll also perform tracks from his back catalogue and a few covers from artists that inspire him. Ciaran is an engaging story-teller and astonishingly talented musician who sings from his heart.

Ciaran Gribbin, who originally hails from Northern Ireland, has a fascinating story which is a multi-faceted tale about never giving up on a childhood dream to be a rock star. It's an inspirational account of talent that meets hard work and overcoming the knocks and disappointments to live a dream. A unique memoir of how patience, persistence & determination made that dream become a reality.

This intimate gig will leave you enthralled by Ciaran's story and moved by his incredible musical and vocal talent. Not to be missed!