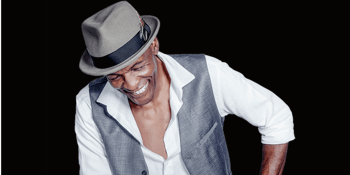 We are abiding by all COVID 19 Restrictions and Protocols so anyone displaying signs of illness will not be permitted entry.

All Shows Are 18+ - Doors Open 5.30pm and venue will close at 8.15pm sharp
Venue contact - brassmonkeycronulla@gmail.com
...
Steve Clisby’s career has been about breaking down barriers. Growing up as a young black man in a largely segregated 1950s America. Creating an unlikely life for himself bringing soul music to Europe. Holding on to a love of jazz to carve out a 50 year career in a world besotted with rock n roll. Taking the leap to audition for The Voice while holding true to his musicianship. Collaborating with Thundamentals, Hermitude and Chew Fu at the age of 68. Nobody told Steve Clisby he couldn’t. So he did.

A novice to fame, but not to music, Steve Clisby spent over sixty years as a musician, living an inspirational life in the US, Europe and finally in Australia following his muse and love of rhythm & blues and jazz before finding his breakthrough moment.

It was TV juggernaut The Voice which changed his life, captivating audiences as he reached the semi-finals, broadcast into more than two million living rooms, introducing the nation to Steve’s muse and soul.

“It was a big risk for a jazz singer to take,” said Clisby. “My band razzed me out at the time for attempting it at my age and it took me a while to adjust and to realize just what impact it was going to have on my life. Big love and a genuine connection from that TV audience had a profound impact and made me able to confidently explore my musical curiosity. I loved it!”

“In a lot of ways the last twelve months have really liberated me. I have decided to have some fun and while I love most music styles now I want to record some more uplifting and less serious music because I can.”

Now Steve Clisby begins another chapter in his music, with a new album that sets out to give fresh interpretation to his heritage and inspire a new generation of fans.

Recorded and mixed at The Grove Studios with Scott Horscroft (The Presets, Empire Of The Sun, Birds of Tokyo) and Andy Mak (Bertie Blackman, Boy And Bear, Tina Arena), the album is a true contemporary statement, reinventing classic soul, funk and jazz inspirations into a quintessential pop record. From the raw power of the album’s lead single “Walking These Streets” to the Seal-esque emotion of title track “Every Time I Close My Eyes” as well as subtle reimagining of modern classics like Coldplay’s “Magic” and John Legend’s “All Of Me”, the album is a triumph of timeless music which transcends age, genre and demographic, creating a sound dripping with the life experience and joy that only an old soul with a young heart can lay down on a record.

With a childhood in the 1950s, Clisby battled racist attitudes while never allowing it to be an excuse and gained a work ethic and love of music from his mother (who has just celebrated her 103rd birthday!). Relentlessly spinning vinyl classics from female legends of jazz such as Ella Fitzgerald, Sarah Vaughan and Carmen McCrae, she cemented Clisby’s early appreciation for unique and soulful vocal interpretations.

From jamming with Hendrix at the Experience Club on Sunset Boulevard to being broke and homeless in Torremolinos Spain, in the late sixties, the talented twenty one year old decided to make music his life’s work. In the early seventies, he and seventeen musicians followed the infamous Hendrix trail to Europe – and there they stayed, making Holland their base and beginning a two decade career as American Gypsy.

A record deal, a string of hits and numerous television appearances cemented the group as the African American soul voice in Europe, touring alongside Chaka Khan, Hot Chocolate, Kool and the Gang, Santana, Frank Zappa and Taj Mahal.

Since that time Clisby has toured numerous countries including Denmark, France, Holland, Belgium, Luxembourg, Germany, Russia, Ukraine, USA, UK and Australia. He has released a dozen albums and remained true to his musical dream.

In his long and distinguished career he has collaborated with award-winning producer/writer, Narada Michael Walden (Madonna, Whitney Houston, Mariah Carey) and Errol Brown (Hot Chocolate) with Groove Armada re-recording the track Inside Out as Whatever Whenever and Neneh Cherry recording Steve’s track Golden Ring on her album Man.

After half a lifetime globetrotting, in 1999 Steve Clisby made Australia his home and in 2013, he became a citizen.

“I connect with this country on so many levels. Australia is young and growing and change is part of the culture, politically, environmentally and artistically and anyone can be a part of the process. It is the most beautiful place I have ever been.”

While Steve’s televised rediscovery brought about enormous recognition, it was also a profound personal and professional journey.

“It really forced me to let go,” he says. “I had to stop trying to control every little detail of my career. I learned to keep things simple and to get straight to the point.”

Following The Voice, Clisby was selected for the high profile Commonwealth Bank “CAN” campaign which gave fans further insight into his life, airing for over twelve months and resulting in the release of the track “Three Little Letters” which is also included on his new album.

“It was yet again something I didn’t think I would ever do,” he explained, “We musicians like to think we are credible and are always critical of things that can be seen to be selling out, but this CBA ad was perfect for me. It was MY life story and really spoke in a way that is authentic to me and my message. Both this and The Voice has taught me that if you’re open to new things, your world view can be something that continues to evolve.”