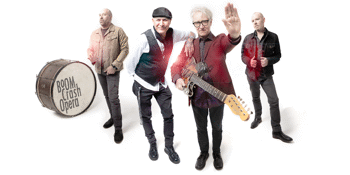 Paddo Lounge (Paddington RSL) (Paddington, NSW)
Saturday, 12 June 2021 8:00 pm
52 days away
18 Plus
POP
Rock
Send this event to
Dale Ryders return to Boom Crash Opera worked out so well, the boys are very pleased to announce another tour celebrating the bands vast catalogue of songs in both electric and acoustic mode at a selection of hand-picked venues in NSW, QLD, SA and VIC.   In June 2020, Dale, Peter ‘Maz’ Maslen, Peter Farnan and John Favaro plan to delve deep into the annals of the BCO back catalogue... playfully referred to by the band as ‘digging into the crate’ to work up obscurities and deep album cuts for the fans.