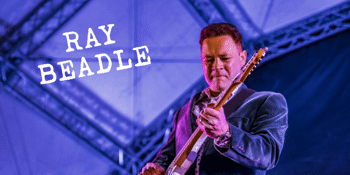 Ray, George and Ben went into Studios 301 in late 2021 to lay down a brand new album, taking the recording process back to basics and recording direct to tape, this album is the first for Ray with this lineup of George and Ben, who have  have been playing together for several years now, The result is something special and possibly Rays best album to date, the boys hit the road when the album hits the stores Friday 1st April 2022

Ray's guitar and vocal styles evoke numerous blues legends, whilst concocting a breathtaking style all of his own.  It is not by chance that Ray has become a favorite amongst Australian blues and music fans.  An exhilarating guitarist, an enthralling singer-songwriter, and an extremely talented performer, Ray was awarded Best Album, Best Song, and Best Male Artist in the Chain Blues Awards.     Ray Beadle is the genuine article, his music comes deep from the heart and soul, stirring emotions in people with his guitar genius.

Ray’s music is rich with a deep history of the Blues; Rich from 20 years of experiences garnered from performing Nationally and Internationally; and rich from a deep understanding of his instrument and how to make it stir something within the listener.  He knows that’s what the Blues is about.  Ray’s life as a musician started when he was just 9, and for the next 20 years, Ray has played with and learnt from the best, including many years spent performing and recording with the Foreday Riders; (commonly referred to as the ‘University of the Blues’).

Ray's next album saw him pushing the boundaries leaning more towards Jazz with the release of Twisted Blues with Clayton Doley and Andrew Dickeson (The Guitar, Organ, Drums Trio) one of best collaborations the world has seen since Wes Montomery, Jimmy Smith and Grady Tate got together in the 60′s to change the shape of Jazz as we know it, pushing it to a new level, modernising it and putting their own unique blues stamp on it!

With the downturn of live shows in 2021, Ray took to the studio, a basement at his managers house to record some solo tracks with his Tasman acoustic guitar, thinking what it would have been like to see the Delta bluesmen in their prime in some juke joint down in Mississippi. Inspired by the idea, the power of the blues can have in it’s simplest form “voice and guitar” delta style. The result is a 4 track EP, Death Bed Blues released 29th November 2021