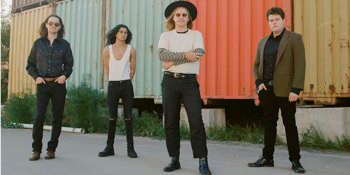 Brass Monkey (Cronulla, NSW)
Friday, 22 April 2022 7:00 pm
85 days away
18 Plus
Adult
Music
Send this event to
Sleeping in vans, drinking beers at the beach, spending nights in the pub; Tommy Gun is the embodiment of the youth of Sydney’s southern beaches. For those craving summer nostalgia, this band is the sun setting on the horizon and the curtain drawn back, signalling the start of the show - and what a show it will be!

Lead by Tommy Gun (The Kava Kings, Nathan Cavaleri) and local musicians whom have played in acts such as Ruby Fields and Lost Tropics, this five-piece band jumped straight into the studio with producer George Georgiadis (Gang of Youths, Last Dinosaurs, The Vanns)

They will be celebrating the release of their debut EP ‘Head Noise’ at The Brass Monkey.